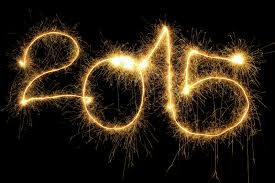 Believe it or not, facial plastic surgery, like fashion, is subject to trends. What’s “hot” changes constantly, and who wants which procedure changes as well. Over the past few months, it seems that demand for liquid surgery (without the knife) has increased, and men are beginning to turn up for tweaking more frequently. There are also some exciting new products waiting for the FDA nod in 2015. Here’s what I have on my radar for the year to come.

Basically, anything non-surgical, or “liquid” is exploding in popularity in my office. The two most common, non-surgical “liquid” procedures I’ve seen a major increase in are Liquid Rhinoplasty and the Liquid Facelift. At this time last year, I was performing about 1 Liquid Rhinoplasty per month. Now, it’s more like 1 or 2 per week!

In these “liquid” non-surgical procedures, a combination of Botox and various facial fillers are injected to achieve the desired result without a scalpel. In the right candidate, a Liquid Rhinoplasty can even out irregularities along the bridge of the nose, raise the nasal bridge, or camouflage a dorsal hump on the profile view. Similarly, in a Liquid Facelift, a combination of Botox and filler is used to turn back time, rejuvenate the area around the eyes and mouth, erase fine lines and wrinkles, and replace the volume that our faces tend to lose with time. During a liquid procedure, ice is used to numb the skin, and small needles are used to inject filler and/or Botox. Not all nose concerns are amenable to Liquid, non-surgical, Rhinoplasty or Facelift, but if you are among the lucky (or unlucky, depending upon how you look at it), you can skip the pain and recovery of surgery. Results are dramatic and instant, and so is the savings!

Typical results of a Liquid Facelift 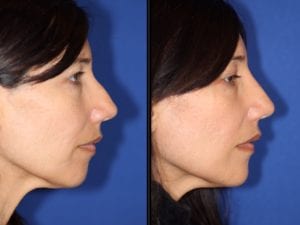 Over the past few months, I’ve seen a serious increase in the number of men coming in for cosmetic pick-me-ups, and I expect the trend to continue in 2015. To what do we owe this “BRO-tox Boom?” When I ask, the main reason men report seeking out cosmetic surgery treatments is to appear younger at work. It seems that the combination of increased availability of easy outpatient treatments, wider cultural acceptance of cosmetic procedures, and an increased emphasis on the value of youth in the workforce has fueled a “menaissance” in facial plastic surgery.

The American Society of Plastic Surgeons has reported that the number of men seeking Botox has increased 310 percent since 2000, and I’ve seen a similar increase with many other facial plastic surgery procedures, including facial filler injection, laser treatments, rhinoplasty, and neck liposuction. I would guestimate that three years ago, less than 10% of my patients were men. Presently, I would say that around 30% are. 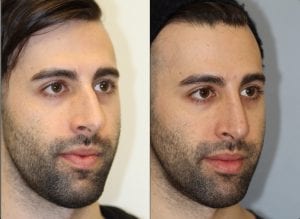 Get ready for this: A needleless Botox may receive FDA approval in 2015. There is a new, investigational, formulation of botulinum toxin type A that uses a proprietary peptide technology for delivery across the skin. It’s not your mother’s wrinkle cream, it’s a Botox cream!  The topical treatment will still need to be applied by medical personnel in a doctor’s office, so it’s not a do-it-yourself home treatment. However, it may be useful for people who are afraid of needles, or for large area Botox treatments, such as treatments for excessive underarm perspiration (Yes, you can do that!).

For more information on the many procedures we offer, or to schedule your consultation, you may contact us by calling 212.750.1020, or fill out the form below to contact the doctor directly.